In our previous article, weexamined some ofthe aspects of game design, in particular challenge and choice. Challenge and choice can create something which is entertaining, but by themselves do not make a game—otherwise a quiz could be considered a game.

To fulfil the game criteria, the player needs to be tested not just once, but continually. We need a third element.

A game is more than a singular challenge. It is, essentially, a series of micro challenges—we might face hundreds or thousands during the course of the game. Things like “collect a coin” or “kill an enemy” or “jump the pit”.

Sometimes, the player might deliberately “fail” a micro-challenge in order to benefit overall (intentionally taking damage to reach a powerup) but doing counter-intuitive moves is often a result of complex gameplay and a clear overall goal. A game needs to contain challenges which are not static, and revolve around choices the player has previously made.

Change is what provides content. When we play Mario, we don’t repeat the first level over and over;we want to progress to the later levels. It’s not just the desire to complete the game, but the satisfaction of overcoming more difficult challenges which drives us.

A player wins a game when all challenges have been completed. A player gets bored of a game when all challenges become trivial. If changing things around provides us with more content (more challenges), then the player will take longer to get bored of the game. This is partly why some “hardcore” gamers choose to deride casual games such as Farmville: they see the game as trivial, and therefore boring. Of course, the definition of trivial (and boring) varies for every individual.

There are many ways to provide the stimulus of change within a game. The most obvious is simply having multiplelevels, but achievements can also provide an aspect of change. Completing a game shows you’re good at it, but a pacifist run where the player doesn’t kill shows mastery of a different sort. It provides more content to the player and in some cases can double the lifespan of a game.

What Is a Game Without Change?

Without change, players become bored very quickly. The use of change not only provides content, but allows the players to feel as if they’re making progress.Mario (again) is a great example of this. Although in the first Mario, worlds were uniform, in Super Mario Bros 2, the worlds changed. World 1 was a grass world, World 2 was a desert, and so forth. Not only did the environment change, but some monsters were also world-specific, so the worlds had specific feels to them.

Theming levels is one way to provide a certain feel, and that slight graphical swap can sometimes be enough to reaffirm a feeling of progress. Other games have used similar tricks, including the old “palette swap”, aka changing a few colours. Old JRPGs would take standard enemies and paint them red or black as “upgraded” versions, and Mortal Kombat famously includes nine different characters who utilise the same basic character model. 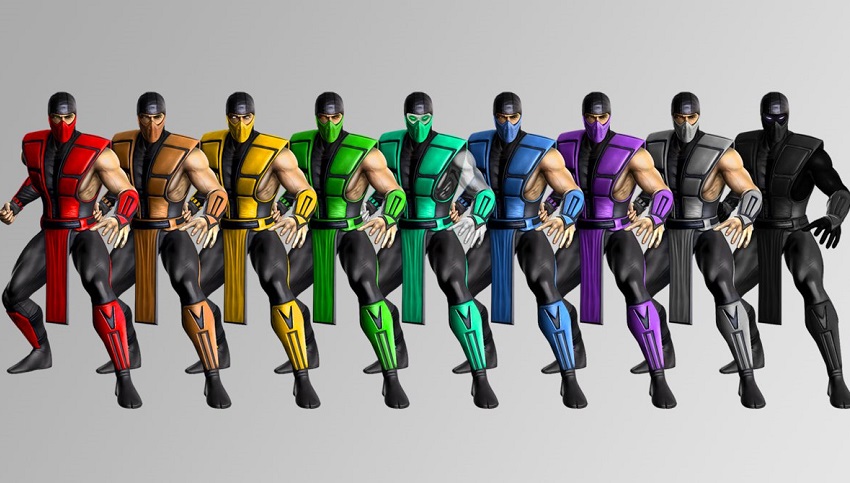 It’s useful to think of the micro-challenges within a game as puzzles. A puzzle is something that can be solved; solving it again doesn’t provide you with any greater accomplishment. Minor variations on that puzzle can keep things interesting indefinitely, however.

Crosswords are probably the greatest example of this—the basic principle behind the crossword is simple, but by simply varying the words, enough content can be produced for newspapers across the world every day.

What Happens When We Do Change in the Wrong Way?

As we’ve seen, no change or not enough change simply means the player will get bored quickly. The otherwise excellent mobile game Flow Free comes withover 1,000 levels, with more purchasable. While some people will love this, it seems likely thatmost players will never get near to completing them all. Of course, it’s hard to argue that “too much content” is a bad thing, but most of the levels end up looking very samey—and although the levels change, the puzzle behind them remains essentially static. It doesn’t take long for a decent player to “solve” the game, and at that point solving the levels themselves becomes trivial.

This is the risk that procedurallygenerated content faces. Although, in theory, infinite content sounds amazing, the fact is that without some very clever design behind those algorithms, most of the content generated will become stale very quickly as players solve the “core puzzles”.

Imagine creating a game which asks the player to add two random numbers. Once the player has solved 11+8, then solving 12+7 or 18+1 doesn’t actually provide a new experience. And if all your game consists of is adding numbers together, then players will get bored pretty quickly.

On the flip side, it’s also possible to implement change too quickly. The gradual implementation within a gameis oftenreferred to as a difficulty curve. Players want that challenge, and ideally the difficultyshould increase in line withtheir skill. There’s nothing wrong with the odd difficulty spike, but the player shouldn’t find themselves hitting an impossible brick wall.

These are extreme examples, but they do happen.

Bioshock utilised pipemania-style puzzles for its hacking section, although for the most part, this mostly optionalcontent was well received.

Less well received was the mandatory boss combat for Deus Ex: Human Revolution. While most players had no issues, players who decided to putcharacter points into stealth suddenly found themselves against a brick wall. Not only did it break what the game (for these players) was about, but it meant that the choices the player had made before (choosing to invest points into stealth) was “wrong”: a trap choice for the player.

So, change is important, but it’s essentially just one half of the “content creation” coin. If players only need challenge, choice, and change, then what stops crossword puzzles from being games? What about jigsaws, or sliding block puzzles? These things are “game-y”, but they are not games. We need one last thing—something which ensures the player is constantly engaged, and cannot just “solve” our game immediately.

Chance is the final element of game design. As we play our game, we make plans on how to acquire gold, defeat our foes, and otherwise accomplish our goals. However, we won’t always be successful: our gaming skill is fully tested when we are able to adapt to conditions which weren’t initially planned. You’re not expected to play perfectly, as long as your overall strategy is sound.

Chance can exist in games in many forms. Most common are dice, cards, and random number generators, but humans can provide their own chance as well. Humans misjudge, make gambits, and otherwise play unpredictably. Without that human element, games like chess would be remarkably dull—two players facing each other would have the same outcome every time.

What Is a Game Without Chance?

A game without chance is simply a puzzle. It can be solved, and when a puzzle is solved, it no longer provides entertainment. This is why newspapers publish a new crossword every day, rather than simply republishing the same one over and over.

So how does chance affect game design?Imagine that I give you a map of the world and four coloured pens, and ask you to colour in the countries in such a way that no two colours touch. This is somethingyou should be able to accomplish with a bit of time and brainpower. It might briefly keep you entertained, but it’s not really a game. It’s a puzzle, and it has a solution.

If, however, I randomly colour a country in every time you make a move, things change. Your end goal is essentially the same, but now you have an additional parameter to worry about. You can’t simply colour countries in one at a time; you need to start thinking about how to avoid my countries.

The game no longer has a singular solution—it has a selection of “best fit” possible solutions. The game cannot be solved on the first move: every move requires “resolving” the game. Indeed, the game might unfold in such a way that winning isn’t even possible.

This is what really defines a game, and separates games from puzzles. You are trying to make the best decisions in an ever-changing world, and that change is unpredictable. You can make informed decisions and calculated choices, but there is very rarely a correct choice—simply a best choice.

What Happens When We Do Chance in the Wrong Way?

The balancing of chance within a game is a delicate act. Because a game is a direct test of players’ skill, we tend to find that players of low skill levels (such as children or non-gamers) favour games with a high chance aspect, and high-skill players (hardcore gamers or competitive players) dislike it. This is, unsurprisingly, because players like winning, and luck tends to neutralise the impact skill has.

The main danger when implementing chance is that it can override choice. Choices a player makes might be rendered unimportant by the roll of the die. When a player feels as if the choices they are making are pointless, they will lose interest. Imagine a Risk player who only rolled 1’s for the whole game. Of course, some players will like high-variance games, but that’s part of understanding your player base.

We’ve talked before, bothbriefly and in depth, about the implementation of randomness within games, but the basic principle is this: a player needs to feel both that they are capable of winning and that the choices they make are relevant. Tipping the scales of chance one way or the other can affect that and cause frustration.

Putting It All Together

When we make our game, we use these four elements, layered on top of each other, to bring our vision to life. We can think of it this way:

This is the essence of game design. There are further concepts that can be built upon this—ideas like narrative, exploration, and music—but these are alldressing. They enhance the experience of a game, but they are not necessarily relevant to the game itself.

The most important question, of course, is why is any of this important? We all know what a game is, why spend so long breaking it down?

Simply, because so many of us get it wrong. Many fledgling designers make games that show off how clever the designer is, but fail to appreciate that a game is supposed to be played. Even experienced game designers working for large companies can get it wrong on occasion, individual egos refusing to take on criticism. Look at any game that failed critically, and you’re guaranteed to be able to identify where they broke these rules.

Of course, sometimes you’re able to break the rules and get away with it. No-one is really criticising the developers of Minecraft for not making creative mode hard enough. But Minecraft’s creative mode isn’t really a game—it’s a toy. It’s a canvas where you can create beautiful worlds without the risk of being eaten by monsters. A world that has inspired amazing feats of ingenuity, from replicas of Star Trek’s Enterprise to aworking, in-game mobile phone.

So before you make your game, think about what you’re aiming for. Game design is a complex field, and you need to juggle storytelling, music direction, art design, and a million other things. But if you fail at the very core—if your foundation is unstable—then you’re building on sand, and it’ll come crumbling down around you.