In this tutorial you’ll learn the workflow for recording a 360 video using a multi-camera setup, plus some special at some tips and production tricks for shooting.

How to Record 360 Video With a Multi-Camera Rig

In This Video Tutorial

What is a Multi-Camera Setup for 360 Video?

A multi-camera setup is one that records footage intended for 360 video, where each camera in the rig is a traditional single-lens camera, such as a GoPro, and the video from each camera is recorded to multiple memory cards. After the video recorded, the footage from each camera is stitched together to form a complete 360 video. This differs from ‘all-in-one’ 360 cameras, such as the Theta S or Gear 360, which record everything from two or more lenses to one file on one card.

There are a number of extra pieces of equipment you’ll need to record multi-camera 360 video:

The first practical lesson I learned about recording 360 was to always do a recording test before leaving
for your location to make sure all of the cameras are hooked up properly in your
array. The last thing you want is to be out in the field, completely
set up, and then get an error right when you hit record!

Next,
make sure you have your camera on a narrow, but well balanced, mounting
solution. A monopod with a sturdy tri-leg base is a good choice. I am using the Manfrotto Boom 3-K pole with a Manfrotto Hi-Hat (that’s a very short tripod).

The base of a traditional tripod is too large for 360 cameras: nobody wants to see big tripod legs on a large portion of the video. It is also important to make sure the camera is mounted straight vertically, not leaning to one side. I also got the best results with the camera mounted at head height (roughly 6ft) or higher. This helps with any parallax issues during the stitching process because usually the ground will be the closest area to the camera. The higher the camera is mounted, the less of an issue parallax will be during stitching.

Be aware of the camera seamlines and angle the cameras so that your subject isn’t directly on a seam, or directly split in between two cameras. This will help drastically in the stitching process later. I also recommend keeping your subjects 5-10’ feet from the camera rig when filming, again to help reduce any parallax issues between the cameras. It is much easier to correct any stitching issues when a person is 10’ feet away, instead of them being 1’ foot from the camera. And they won’t look like a giant when a person is watching the final 360 video. When a person is holding a 360-camera rig would be the only exception to this rule. And if they do have to hold the camera rig, adjust the length of the boom pole so that it is as far away from them as possible and still safe for filming the activity.

Try to avoid too much movement on the rig while recording. Movement can cause a higher probability of seamlines and ‘jello’ shakes in the final video. Much like traditional cameras, micro shakes can show up when filming scenes with too much movement and these shakes can really make seamlines become apparent. 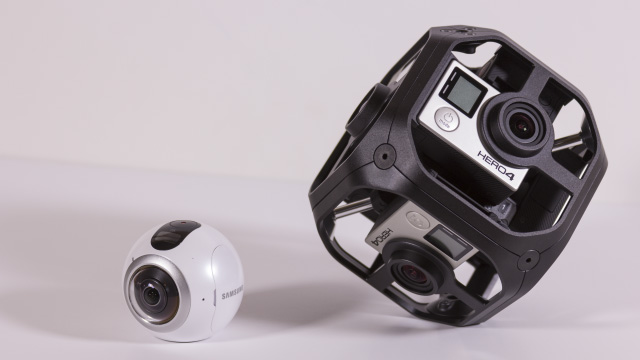 Probably the biggest pro for multi-camera 360 setups is the resolution. A set up like the Omni can film in up to 8K when all of the footage is stitched together. That 8K footage can also be downscaled to 4K, and when it is compared to the native 4K from all-in-one cameras the quality difference is substantial. The 8K downscaled footage will retain a lot more image detail, give you more options color grading and hold up much better when it is compressed. 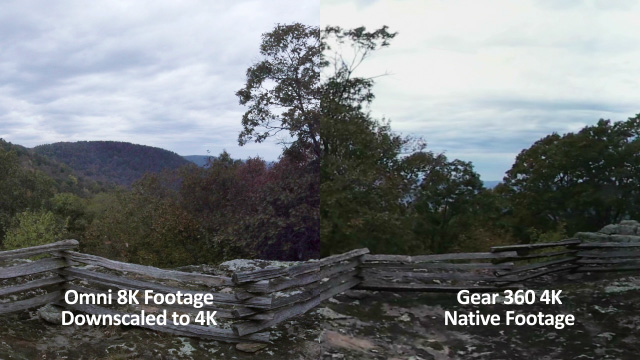 This does bring us to the final steps in a multi-camera workflow and that is stitching the 360 video together. I highly recommend Autopano Video Pro for stitching 360 video, it is pretty much the industry standard. What it amounts to is importing all of the clips from one of your shots and letting Autopano Video Pro create an automatic stitch from you clips, you can then refine really easily for the best results before you output your final 360 video. 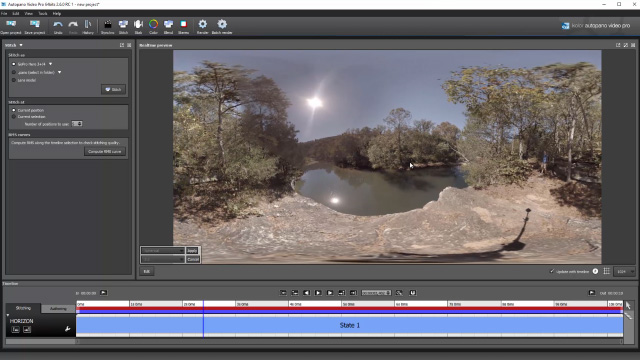 Autopano Video Pro does come included with the Omni rig, and also has an extra feature when importing footage shot with the Omni. The Autopano Video GoPro Omni Importer recognizes meta-data stored on the memory cards of Omni footage and it will automatically create 360 previews of all of your shots, so you can quickly identify the best shots you would like to import. You can also give them tiles, preform stabilization and color grade multiple scenes all at the same time using this importer function.

Hopefully this workflow tutorial gave you all some insights into everything that goes into multi-camera 360 video. Feel free to leave any questions you have in the comments!